The Van Gogh Museum says it has identified a long-lost Vincent Van Gogh painting that spent years in a Norwegian attic because it was thought not to be authentic. It is the first full-size canvas by the Dutch master discovered in 1928.

"Sunset at Montmajour" depicts a dry landscape of oak trees, bushes and sky, painted with Van Gogh's familiar thick brush strokes. It can be dated to the exact day it was painted because Vincent described it in a letter to his brother, Theo, and said he painted it the previous day — July 4, 1888.

"This is a great painting from what many see as the high point of his artistic achievement, his period in Arles, in southern France," he said. "In the same period, he painted works such as 'Sunflowers,' 'The Yellow House' and 'The Bedroom.' "

The museum said the painting now belongs to an unidentified private collector and will be on display at the museum from Sept. 24.

It did not disclose full details of how the painting had been recovered but said that it had been owned by a Norwegian man who had been told it was not by Van Gogh, so it languished for years in his family's attic.

Museum had itself rejected the painting's authenticity once in the 1990s, in part because it was not signed by the artist. But a new two-year investigation had convinced them, with new techniques of chemical analysis of the pigments showing they were identical to others Van Gogh used on his palette at Arles. Meanwhile, an X-ray examination of the canvas showed it was of the same type Van Gogh used on other paintings from the period, such as "The Rocks," which hangs in Houston's Museum of Fine Arts.

Researchers "have found answers to all the key questions, which is remarkable for a painting that has been lost for more than 100 years." 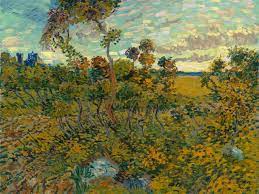 The Van Gogh Museum, which houses 140 of the Dutch master's works, receives more than a million visitors annually, and Van Gogh paintings are among the most valuable in the world, selling for tens of millions of dollars on the rare occasions one is sold at an auction.

The exact location "Sunset" depicts can be identified: it is near Arles, France, where Van Gogh was living at the time, near Montmajour hill, and the ruins of an abbey of the same name. The abbey can be seen in the background of the work, on the left side.